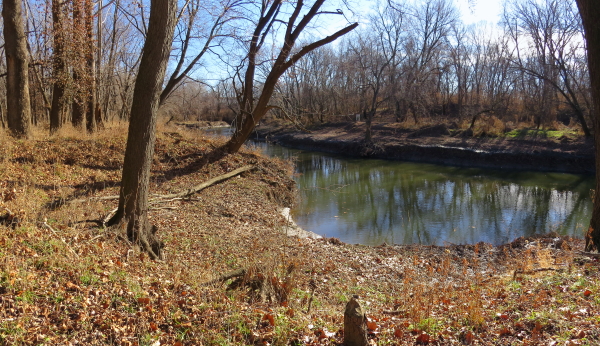 About one hundred feet behind these markers is where Byram’s Ford crossed the Big Blue River in 1864. On December 25, 2014, theCivilWarMuse took the photograph of Byram’s Ford you see on the panel. If you walk around the markers, south toward the river, you can easily reach the ford.

The primary route of the Santa Fe Trail went from Independence south-by-southwest to New Santa Fe, crossing the Big Blue River over the original “Red Bridge” near present-day Minor Park in Kansas City, Missouri. Scroll down the web page to see a map of the historic trails in this region.

The Byram’s Ford Road was a side trail established as a shortcut to reach the grazing fields used by the freighting operations of David Waldo and those of Russell, Majors and Waddell. At the time, the Ford was a good crossing point for mounted and wagon traffic and featured a traversable descending grade to the stream course and a firm rock-lined bottom through the Big Blue River.

As was customary at the time, Byram’s Ford received its name from the individual who owned the land adjacent to the crossing. In 1839 Augustine Byram emigrated from Kentucky and settled on the land west of the crossing. Augustine’s cousin, Susan Byram, married William Waddell. Augustine began working as a teamster for Waddell’s early freighting operations. Augustine built a log house overlooking the Ford about 500 yards west of this location. After Augustine Byram’s death in 1848, his sons Augustus and Peter Byram and other family members occupied the log house while working in the freighting trade in the 1850s for Russell, Majors and Waddell.

When Russell, Majors and Waddell went bankrupt in 1863, the Byram brothers purchased the company’s assets and began freighting out of Atchison, Kansas. Thus, the log house was unoccupied during the Battle of Westport.

While the Byram’s Ford crossing was still being used toward the end of the 19th Century, by the early part of the 20th Century, the Ford had fallen into disuse.

This site was placed on the National Register of Historic Places in 1989 . There is a concrete marker to that effect on the west side of the river, about 100 yards up the Byram’s Ford Road from the riverbank. The land containing Byram’s Ford and the adjoining Byram’s Ford Road sites were purchased by the Monnett Battle of Westport Fund and the Association for the Preservation of Civil War Sites in 1992. In 1995, the land was donated to the City of Kansas City and the Parks Department to establish the Big Blue Battlefield Park. Scroll down the web page to see a map of the Byram's Ford Historic Site.