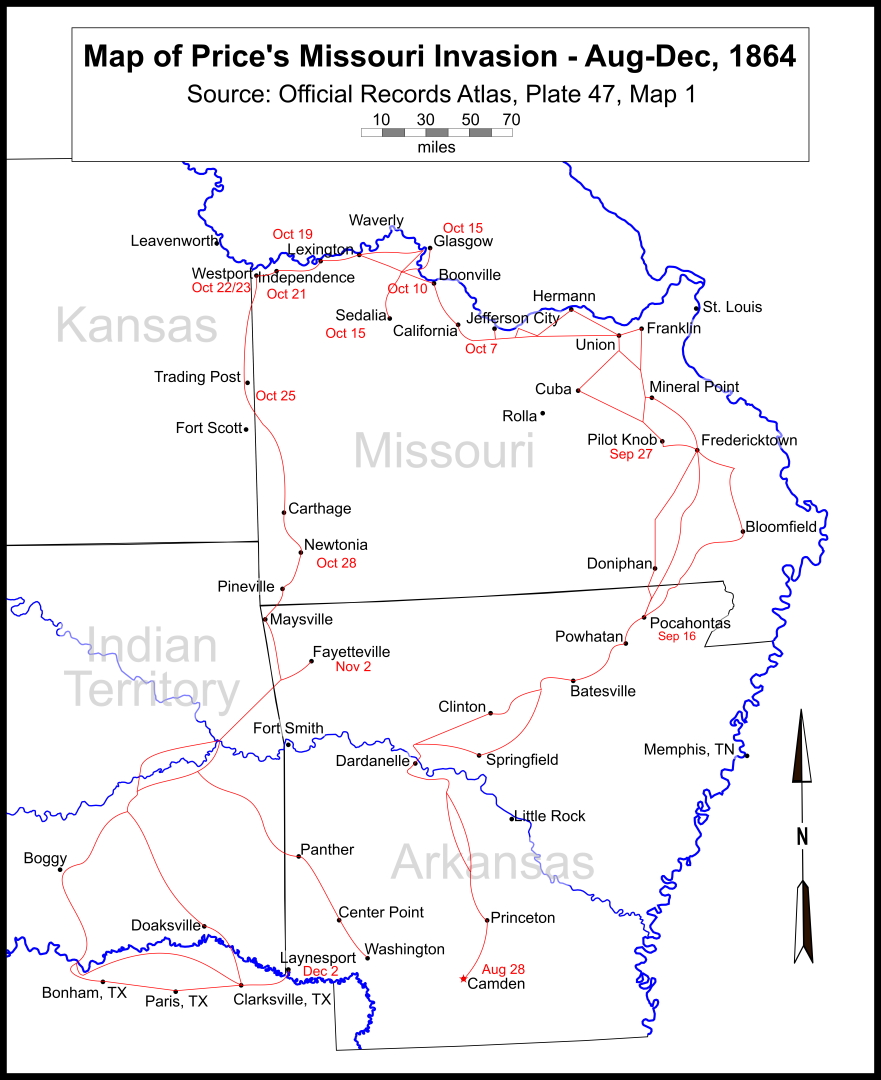 After Sunday’s battle, the Confederates continued south from New Santa Fe for another twenty miles or so. Brig. Gen. M. Jeff Thompson later recalled the Confederate encampment that night along the middle fork of the Grand River.

We passed rather a gloomy night, but from the fatigue occasioned by the constant fighting for the three past days, I slept as soundly as if there were not a foeman in a thousand miles … On the morning of the 24th, we lost several hours in getting the train untangled, for in the confusion of the night before, men and wagons—artillery and refugees, were so mixed that it was nearly impossible to unravel them.

The Federal pursuit caught up to Price’s rear guard just north of the Marais des Cygnes River around 1:00 a.m. on Tuesday, October 25th. It was dark and a heavy rain was falling. At this point, the Military Road passed between two hills, referred to as The Mounds. The Federals skirmished with the Confederate rear guard and drove the Confederates off the hills and across the river. The Federals captured about 100 prisoners, several wagons and two artillery pieces.

Pausing briefly to re-organize, Curtis ordered the brigade’s commanded by Lt. Col. Frederick W. Benteen and Col. John F. Philips to take the lead and advance down the Military Road. Around mid-morning, the federal cavalry crested the hill north of Mine Creek and saw the Confederate wagon train struggling to cross Mine Creek. They also watched as two Confederate divisions were deploying into line of battle.
Benteen ordered his men to charge the Confederates and was supported on the right by Philips. The Federals broke through the Confederate line, routing them. The Confederates turned and ran, heading south as quickly as possible. Confederate Generals Marmaduke and Cabell were captured during the battle.

Price recalled Brig. Gen. Jo Shelby, who was on his way to attack Fort Scott. Shelby returned to fight two additional rear-guard actions near the Little Osage River and then just north of the Marmaton River at Charlot’s Farm.

That night, Price ordered all non-essential wagons destroyed. The Confederate army was now in full retreat. On October 28th, there was another fight near the town of Newtonia, Missouri. This time Maj. Gen. James G. Blunt attacked the Confederate rear guard, but Shelby’s men were able to repulse the attack.

The Federals called off the pursuit after Price crossed the Arkansas River on November 7th. Price continued his retreat through the Indian Territory and into Texas before arriving in Laynesport, Arkansas, on December 2nd. Price’s army travelled 1,434 miles during his expedition into Missouri.